An Introduction to Something

I started to peel my eyes open as the buzzing bells rang near my head. I slipped my hand below the cotton cushions and tapped the translucent screen, stopping the sound. Looking up at my slanted attic-esk ceiling, I used my finger to mark an imaginary dash on the wall, symbolizing the twentieth dash for my twentieth year of searching.

No -- this isn’t a coming of age story in which I search for myself amongst a series of terrible decisions. Actually, this is a post-coming of age re-telling. I’ve known for quite some time now that my “age” was inaccurate, and if it weren’t for educational institutions, or the institution I like to call motherhood, I would not be so set on counting my time away.

At 12 years of age I experienced myself gravitating away from my peers. Middle school for me was spent living the dramatic experiences aligned with that of high school, in which I bounced from social group to social group, realizing along the way that I’d much rather be spending time with my abuela comiendo sopa de fideo. Pero no podía tener eso, porque personas kept inviting me to sleepovers, as if I were supposed to enjoy lying on the floor of someone’s basement. Hadn’t their mothers warned them de todos los hombres en la casa? Perhaps it was that, from my mother’s lectures on the dangers of the world, speckled with her comments not to trust men along with the manual on how to not trust men, nor the world for that matter.

So there it is, my mother’s princesa internalized her mother’s words as fear and walked away from a relationship with time. Without asking, I was pushed into a fast-forward, compiling what seemed like the entirety of my teenage years into one great short experience. I felt older quicker, and while everyone else saw me as 10, 11, 12… I felt 10, 16, 17…Today was the day I internally turned 26, outwardly 20, marking another year of navigating the world feeling displaced, awkward, and unusually off.

I wasn’t expecting mi madre to greet me with a pile of gifts, or even words of love, simply because it was my birthday. She would, of course, acknowledge it, perhaps give me a hug, or take me out to breakfast. Nonetheless, my insistent strive for independence was dependent upon striking away any family relations. The years spending time con mi abuela were done, as her and mi madre were in their biennial war. I decided to characterize the year as a year of “mother’s against mothers, distanced by daughters.” So that was my justification for deciding that my 20th year would be the last year I’d be close to such an institution. I now wanted freedom, which could only be delivered through a form of denial -- living at home, yet solely alone.

To further this invented solitude, I equipped myself with a job that began at 5:30 am that supplied me with another dose of counterfeit energy. Six days a week I avoided all familial interactions and threw on my two-part uniform of witty, yet charming that is required by most coffee shops. These “hipster hotspots” are creations by business owners tapping into personalities...hiring people to fill a space and create actual energy...the caffeine that coffee can’t provide. So while I never marketed myself as witty, as time progressed, I was known as the 40-year-old-20-year-old, who, I guess, brought some snippet of joy into the place. This characterization wasn’t all that surprising to my 26-20-year-old self.

As my coworkers and customers slowly wore me down into enjoying interactions with others, work became more than a distancing tactic. I found myself taking on more hours due to the approaching humidity of summer and the prospect of having more time on my hands; it had become my place of refuge. 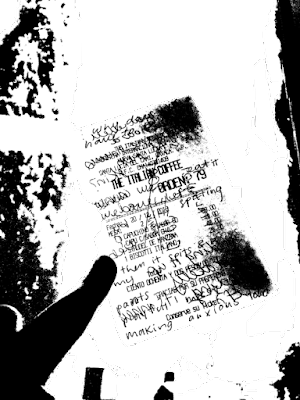 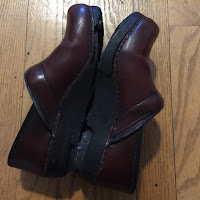